Review of Phineas and Ferb: The Best Live Tour Ever | Kids Out and About DMV

Review of Phineas and Ferb: The Best Live Tour Ever

What do you get when you throw marshmallows, monster trucks, disco, miniature golf, small furry animals, and pants shopping together? Just listen to Candace, using her expertly-honed tattling voice: “Mom, Phineas and Ferb are putting on a live stage show!” 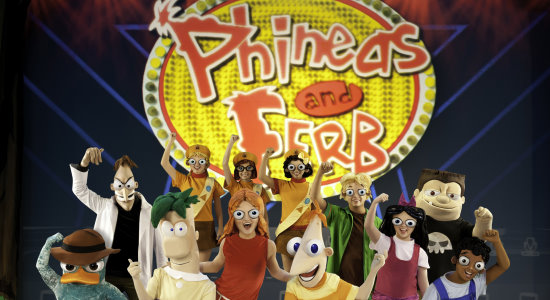 It’s all your favorites from the animated Disney series “Phineas and Ferb,” played by actors, wearing huge masks that transform them into the characters. The storyline—the step-brothers and their crew work to find a way to make the last day of summer the best ever—is secondary to the slick stage production, complete with catchy music, fabulous dancing, and fantastic video effects.

If you’ve ever been to a show at a Disney theme park, you will know what to expect. A thousand or so kids and parents rollicking to their favorite songs from the hit show and reveling in the cool technical aspects of a live performance with lots of integrated video. In one scene, for example, the villain, Dr. Doffenschmirtz fights with Perry the Platypus. The scene moves seamlessly from live action to having one or both characters on the video screen and back to live action. Hard to explain, but really cool.

In classic “Phineas and Ferb” fashion, the show is sprinkled with nods to pop culture that only mom and dad will get. Baljeet has a Bollywood dance number. One of the scenes with Dr. Doofenschmirtz has serious Star Wars overtones. And there is a clip played of a classic video game that will bring “I remember that” chills to any child of the '80s.

My kids, too, were delighted. The younger two (ages 6 and 8) were very much the target audience and had smiles on their faces throughout the show.

My oldest, an 11-year-old girl, was more interested in checking out the sound booth and making mental notes about the technical aspects of the use of video to enhance the production. Regardless, there was something for everyone. Our only complaint was that the audio was very loud. If you have a sensitive kid, you might want to bring a pair of ear plugs along to muffle the sound.

It is a kid show, so expect some audience members to be holding spinning glow sticks or occasionally kicking the back of your chair. Still, the production is perfectly paced to hold the attention of even the youngest theater-goers. The intermission comes at the 30-minute mark, so little ones can use the potty or get a drink before the second half.

There is tons of audience interaction. At the XL Center, the cheaper, terraced seats probably had the better views, but paying for a floor seat meant you got the chance to really participate in the interactive parts of the show. One Perry the Platypus scene includes a herd of cast members dressed as detectives and carrying flashlights wandering those lower aisles. In another portion, that section of the crowd got to play with giant inflatable “golf balls.”

Even those in the upper seats can join in, though, to echo the clapping patterns of the singers or to dance to “Gitchee, Gitchee, Goo,” while gawking at the six lucky kids who got to come on stage and dance with the cast.

Does it matter if you don’t know the TV show? Not a bit. Just be ready for a high-energy, enthusiastic stage show that will delight kids and grown-ups alike.

Is Phineas and Ferb Live coming to your area? Click here to get to their tour page, then click on "Show Times and Tickets" to find out!